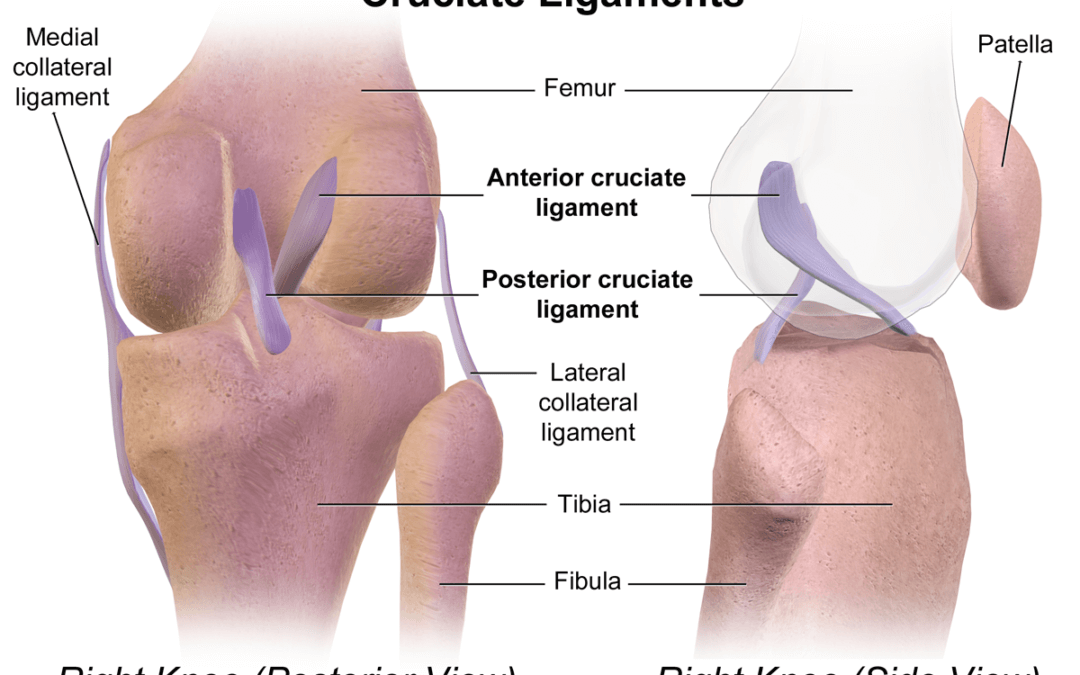 We’ve all heard about footballers getting knee injuries – almost every week there’s something in the news about a footballer tearing their ACL. But it’s very common for dogs to get the exact same injury.

The cruciate ligaments are two bands of tough tissue that connect the femur and tibia (the two bones that form the knee) together. They’re called cruciate ligaments because they form a cross shape between the bones, and together they stop the knee from sliding in a forward-to-backward motion while walking. The picture above is of a human knee but the ligaments are very similar in a dog – we just call them the cranial and caudal ligaments, not anterior and posterior.

As the knee in a dog has some similarities to a human’s, it’s not too surprising that they can get pretty similar injuries. Dogs don’t tend to get tackled on the football field but they can tear their cruciates by landing awkwardly after jumping, twisting, or jumping down from a height (like off a couch or down from the car). This can appear as a sudden refusal to bear weight on the affected back leg, though quite often cruciate rupture can happen gradually and is a nagging limp that gets worse over time. Any limp, whether sudden or long-term, is worth checking out!

Cruciate disease can be tricky to diagnose, especially if the dog is very sore or conversely very stoic in the face of pain. Often to make a definitive diagnosis we need to anaesthetise the dog and take X-rays – we can’t see the ligaments on X-ray but there are a few signs that we can see that suggest a cruciate rupture. While the dog is relaxed and pain free it’s easier for us to feel the looseness in the joint from a ruptured cruciate as well.

Cruciate disease is painful, and if untreated can cause severe arthritis in the affected joint. There are several options for treating a ruptured cruciate – these will depend on your pet’s age, lifestyle and size. Surgery may be required once a cruciate tear is confirmed, but this is best discussed with your vet.