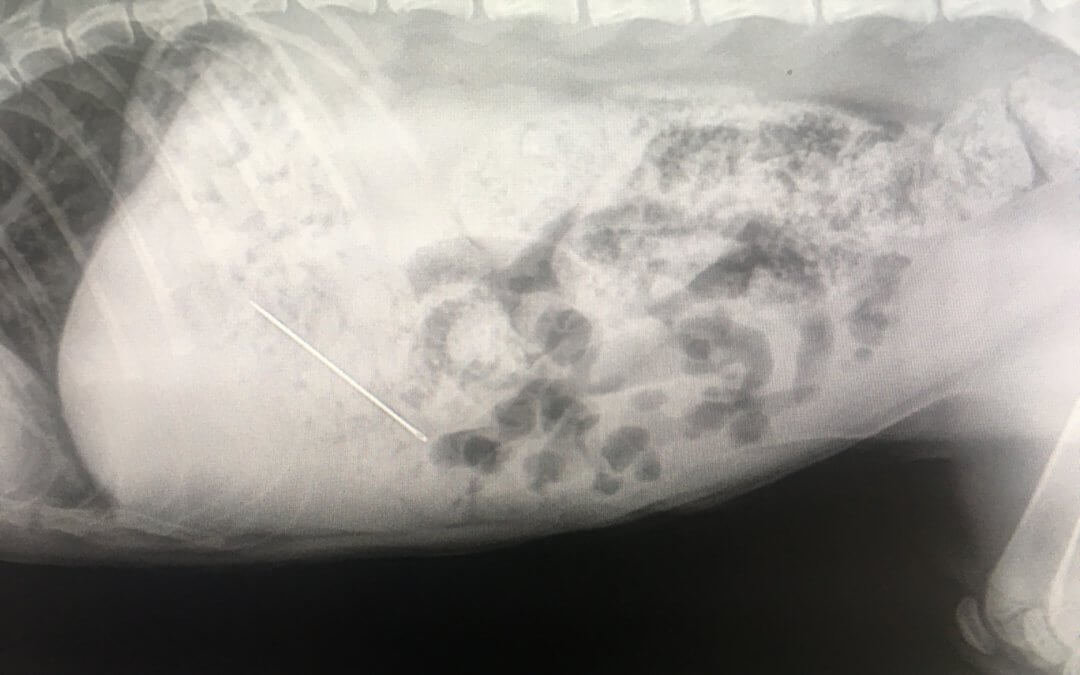 Lots of animal diseases and problems come and go depending on the time of year but one thing we see year-round is animals that eat things they shouldn’t.

Often animals will eat things that will pass through harmlessly but cause a little bit of chaos on the way through – vomiting and diarrhoea as a result of Fido snacking on a nice pile of possum poo, for example. However, we do see animals that have eaten things that won’t pass through safely, and need help from us to prevent them from having devastating effects.

The mouths and stomachs of dogs and cats are significantly wider than their small intestine can stretch to. Under normal circumstances this allows cats and dogs to consume large meals and break them down with stomach acid before they move through as a slurry called chyle for the intestines to absorb. But not all things that cats and dogs are capable of swallowing will be affected by stomach acid and enzymes, and if they move through to the small intestine they can get stuck and cause damage and death of the intestinal tissues.

Cats and dogs can and do attempt to eat a startling array of household objects. Here’s a quick list of things that cats and dogs have been known to swallow that may not pass through safely:

Some of these things might not just cause blockages – sharp objects like needles and rocks can actually perforate the gut and cause severe infection and pain, and objects like batteries can be poisonous or corrosive if not removed promptly. Long thin objects like sewing thread or knitting wool may become anchored at one part of the gut (such as around the teeth) and cause the gut to bunch up around the long thread – this is specifically referred to as a linear foreign body. Linear foreign bodies are more common in cats who like to chase long wiggly objects, but any long thin object can cause this.

For reasons we don’t understand, some breeds and individual animals are more likely to eat foreign objects. We tend to see foreign bodies more commonly in young animals as a consequence of their fondness for trying to chew or play with strange objects, but any age, species and breed of animal may try to eat something silly and some pets are known to be repeat offenders when it comes to this.

Animals that have a foreign body obstruction may display one or more of the following signs:

Sometimes you might even catch your pet in the act of eating something they shouldn’t. It’s important to contact your vet as soon as you suspect your pet may have eaten something unusual. In some cases we can safely make your pet vomit the object up, but there is a limited window of time before the stomach will push its contents towards the intestine and make vomiting unhelpful.

If your pet has eaten something unusual or you suspect they have, your vet may recommend X-rays of the abdomen. Some objects will appear clearly on X-ray such as metal, stone and bone. In other cases like fabric or plastic objects we may see bloating of the intestine in the gut immediately before the obstruction. We can also give your pet Barium Impregnated Polyethylene Spheres (BIPs) to swallow. These are tiny balls with a special metal called barium in them that we can see clearly on X-ray and are small enough to pass through safely. We can watch them as they travel through the gut and see if they get stuck at a particular point of the gut that might suggest a foreign body. And sometimes if a foreign body can’t be seen on X-ray we can locate it with an ultrasound scan instead.

If something is stuck in the intestine, the only way to remove it safely is via surgery. We call this kind of surgery an exploratory laparotomy, or “ex-lap”. The abdomen is opened up and the gut checked to locate and remove the foreign body. If there is damage to the intestine we may need to remove part of it at the same time. An ex-lap is a major surgery and might require some time in hospital to recover.